Wheel Feel - Before the Force Feedback is Applied 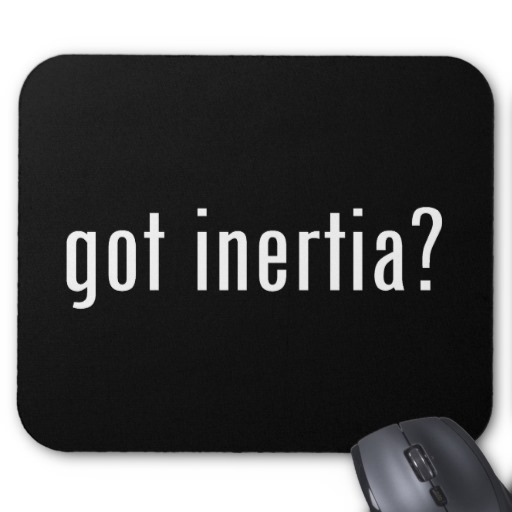 Before we get too far along, here is a quick physics 101 refresher. I promise the rest of the article will be more interesting.

Inertia is the resistance of any physical object to any change in its state of motion, including changes to its speed and direction. It is the tendency of objects to keep moving in a straight line at constant velocity.

In the case of force feedback steering systems, we're concerned with the steering inertia and resistance or friction. Every vehicles steering system has mass and mechanics, therefore every vehicle has some steering friction and inertia. This varies from vehicle to vehicle.

Simulation game developers are faced with the daunting problem of most force feedback wheels having excess default friction and inertia as the result of their small motors combined with a tall ratio belt or gear drive system. It is fairly easy to observe this by simply turning them when not in a game and letting go. You'll feel the resistance of the motor having to spin many times due to the gear ratio needed when using a small, low cost motor and you'll feel the odd way in which the wheel comes to a stop.

It's our belief that "what you feel in your simulation steering system should be defined by you or the game developer, NOT by your force feedback wheel's drivetrain". To that end, we developed the AccuForce as a Direct Drive system. The steering wheel is connected to the motor shaft. There is no drivetrain to induce false physics.

That said, even a direct drive system can have a small amount of this problem and the bigger the motor, the more noticeable it is. It's not as noticeable as having a wheel drivetrain but it's stil there.  The key to optimizing a Direct Drive steering system  in this case becomes motor selection. The goal is to have the smallest amount of internal moving motor mass while providing the maximum amount of torque.

I'm pleased to share that we've struck this balance with the AccuForce Pro. You can spin the wheel freely yet it provides enough torque to give you quite a workout. This allows the AccuForce to feel very light at moments when it should. In testing, we found that this helped sim racing newcomers and veterans alike to be more consistent. It also facilitates the possibility of more rapid wheel positioning, an advantage that was once available only to those running without force feedback.

In further testing, we discovered the following:

It was quite evident that if we were to please all AccuForce users, we would need to allow for tuning of the background wheel feel in addition to providing all of the basics. For example, we provide the ability to adjust game dampening, spring, etc. as any force feedback wheel does, but we also provide what we call AccuForce dampener, spring, inertia, friction, etc so you can adjust the default resistance of your steering system. The game then applies it's effects atop your base settings.

The following screenshot demonstrates how you can easily take advantage of this flexibility in the AccuForce section of the Sim Commander 4. 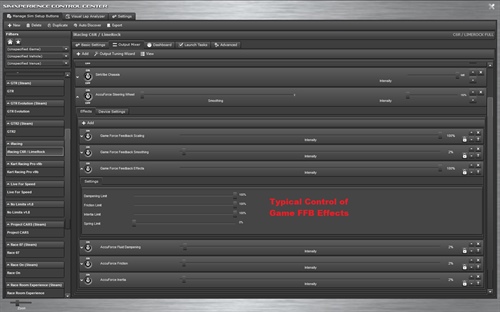